Ever wonder what a NoSleep Podcast production looks like?

Ever wonder what a NoSleep Podcast production looks like?

After 5 years, the popular storytelling show the NoSleep Podcast is still going strong. Stronger than ever, in fact. There are literally hundreds of hours of audio horror entertainment now created and crafted by a stable of talented voice actors, an in-house composer and three, dare I say, skillful producers. The show has a dedicated, loyal fan base and has been making its way up the iTunes podcast charts bit by bit as well as gaining the respect of fellow podcasts and media outlets alike.

With so much activity around the podcast, people often ask about what goes into creating it. While I can’t speak for showrunner David Cumming’s utterly intense production schedule and the monumental effort to cobble together every episode’s stories as well as acting as the show’s host, I can offer my own experience as a producer.

With my current schedule, I typically produce one story a week. I work a full time job and have just enough usable hours outside of it to eke out my contribution to the show. In a typical week, I’m responsible for the completion and delivery of a 20-30 minute story within a 5-6 day turnaround.

Depending on the story, the level of effort can be either relatively light to rather intense. It all depends on the length and the complexity of the storytelling elements. A story that largely consists of a single narrator who describes events in a passive way calls for a significantly different amount of effort than one that features multiple characters and a hefty number of sound effect cues (I’m looking at you, C.K. Walker).

Let’s look at the most recent episode, S7E13 as a case study. While every story I work on is different, this should serve as a good illustration for how complex a production can be. For this episode, I produced the Joel Farrelly story “The Devil’s Toy Box” about a group of young adults who go to investigate a Hallowe’en themed farm and encounter the infamous Devil’s Toybox of urban legend, which is said to drive its occupants to the brink of insanity.

In its over 4700 words, the story details a narrator, six separate characters, five different settings, multiple character interactions, dozens of diegetic sound and non-diegetic sound effects and, through my own interpretation, additional vocal foley and musical beats (usually called stings, risers and hits) for emphasis. Underneath it all an eerie, pumping John Carpenter-esque soundtrack composed by maestro Brandon Boone glues together the overall 80’s horror movie vibe we at the podcast felt the story should emulate.

So what does it all ultimately look like? Well… this! 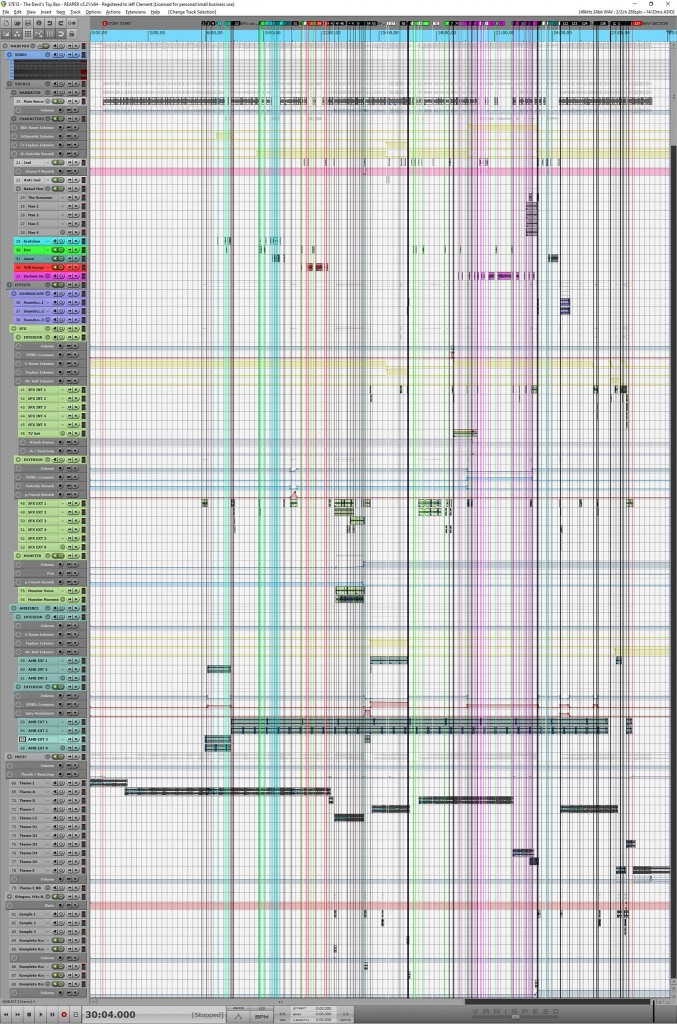 What you’re looking at is a zoomed-out screen shot of the entire project in my audio mixing software, REAPER by Cockos Incorporated.

The vertical lines represent what are called markers, which allow me to make note of when a sound effect needs to happen or when a character is speaking, which is why they come in a variety of colours – one colour per character.

The horizontal lines represent tracks, or layers, of audio. The reason there are so many tracks is because some have different kinds of audio effects applied to them, which can give the sounds different qualities, such as making it sound like they’re happening in a room, or in the background, or behind the door in the forest outside, or in the character’s trippy head space, etc.

Another reason there are sometimes so many tracks is because sometimes the story calls for it, such as the moment the Jeep crashes through the wall of the building. Those “big moments” require the layering of two, three, four or even more sound effects all at the same time – what’s known as sound design – which is arguably my favorite part of being a producer.

To break down the project by the numbers, you’re looking at:

The first and biggest is that there are some projects for which I dive deep into the tiny details, subsequently upping the amount of time spent tweaking things until they’re “perfect”. I try to be careful about that generally speaking. We’re on a schedule; the story needs to be delivered on time; not every production can feasibly be a magnum opus. Every once in a while, however, a project comes along that I want to act a showcase for my work and for the podcast, where I can show off my current skill level as a producer and help add to the overall impression of the show for the listeners. This was one of those projects.

Another factor has to do with the amount of initial audio editing required. Mixing and editing are two different things. I tend to think of editing as pre-production work. It consists of taking the audio provided to me and ensuring that any flubs or mistakes, any issues with the audio quality and any problems with the cadence or pacing of the voice actors are addressed before the project can start in earnest.

Mixing is post-production work: it’s taking everything at its now-ready state and putting it all together like a puzzle. The ideal is when the amount of editing required is so little that you’re almost immediately starting in the post-production phase. Due to the array of different voice actor contributors at different skill and equipment levels and the overall busyness of the boss, sometimes more of the burden can fall on the producer to edit the audio in preparation for the project.

All that aside, the main takeaway is that being an audio producer is just, well, a lot of hard work. And our performers work hard, too!. They have to give life to sometimes almost impossible characters, try on an array of different accents, cover a wide range of emotions and narrate stories that can be epic in scope.

Ultimately, I hope this little article helps to shed some light on the process of creating a show like the NoSleep Podcast. I can only speak from my own experiences and from what I know of my fellow contributors’. It might be that the people who make some of your other favorite podcasts have a way easier time with it. Maybe some dive even deeper into their work than we do. In the end, what matters most is that we succeed in immersing you in a world of audio that captures your imagination and transports you to another world.

And we hope you’ll tune in for more.

If you make audio fiction, you CANNOT go wrong with @audiothing's Speakers. So versatile. I use it in just about every production lately.